The Lasko 2551 is one of the top sellers on Amazon and for the most part, is a solid yet unspectacular unit.

It isn’t the best-looking tower fan, it doesn’t have the largest airflow, nor the most settings and isn’t the quietest BUT as far as getting a good mix of all those features, for the price, this fan would be high up the list.

It’s one of the cheaper ones out there and given some of the poor quality of other tower fans you can definitely do a lot worse.

In fact, as far as performance for money goes we think it’s one of the best tower fans out there. 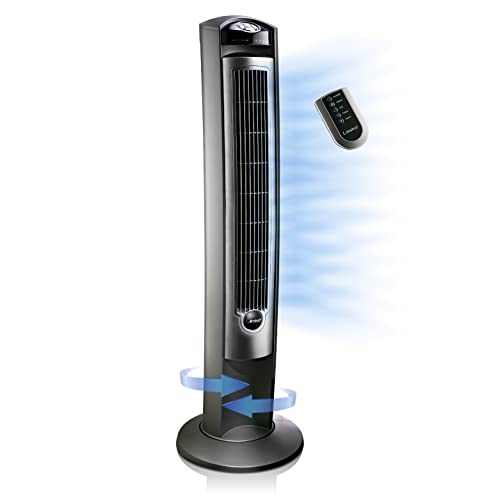 It comes with two design options, one being the fake wooden facade front or the more standard silver.

The fan itself is a bladeless fan so it comes with the benefits such as less noise production and no difficult blades to clean.

The fan comes in 2 styles, the Wooden front design, and the silver.

Quite a few punters have been surprised by the size of this fan, and at 42″ it is on the taller side of Tower fans.

A shortfall with some said punters has been the relatively short length of the cord.

At only around 4ft long there is not a lot of leeway for placement away from the power source.

The standard lights on the base of the fan are not bright, so it won’t light your room while you are sleeping. Ionizer light, however, is very bright and can light up the room if you are using the fan at night.

Some consumers have had to put tape over it.

Safety is always a concern for consumers and they can feel safe in the fact this fan comes with patented safety fuse technology.

Funnily enough, this probably came about after Lasko had to recall a number of units around 2002-2004. With failure comes to progress and we now have much safer products because of the incident.

And to reaffirm that safety factor 2551 is also ETL listed which means it has passed independent North American safety standards.

The design purists might not like the fact the Lasko 2551 comes with a black cord but the patented Blue Safety Plug.

Built into the fan is also a handy carry handle to make it easy to move the fan around the house. A really useful feature considering it’s on the larger side for tower fans.

This fan does not support any Wi-Fi, Bluetooth, or smart app features.

The amount of air it blows is contentious for a lot of users.

While many were happy, others were a little disappointed in how much air it would blow.

Your level of contentedness may well depend on how much air you are wanting to move. If you are looking for the most powerful fan on the market, you would be better looking at its Lasko counterpart the Lasko 4930 which moves a whole lot of air or even the hybrid Lasko 4443 which is probably in between those 2 models in terms of airflow.

On the front of the fan, there are adjustable louvers in the front grill to control the direction of the airflow up and down. With the oscillation side to side, it gives a few options in terms of airflow.

Often people confuse tower fans for air conditioners so it is important to note that this is not an air conditioner and has no thermostat, so you won’t be able to control the air temperature with this.

Most standard tower fans these days come with a minimum of three speeds and the Lasko 2551 is no exception.

With just the three speeds: low medium and high speed there is a standard amount of options for your wind flow.

Other fans such as the Dyson Am07 (10) have a few more wind speeds options.

Like any decent modern-day fan, the Lasko 2551 has the oscillation feature which enables you to spread the airflow around the room rather than just in one direction.

The timer is a bit funny in the way it works.

The timer setting is great for people who are going to sleep and want the fan to turn off automatically.

It’s also a great tool in being energy efficient given you don’t need to keep the fan running constantly.

The timers can be set by both the remote control and on the unit itself.

The Lasko 2551 comes with a remote control that can control all the functions on the fan.

You can control the power, oscillation, speed, timer, and ionizer from the remote and all of these can also be changed on the unit base itself as well.

Also, the great thing about the controls is they are located at the top of the unit at waist height so that means no bending over to floor level to reach the base to change any controls.

The remote control is Infrared and like other fans, it must be pointed at the tower fan sensor and be in light of sight to work.

Unfortunately, in this case, there have been a number of consumers frustrated by the short range of the infrared remote, having to be quite close for it to work along with the fact it has to be in the line of sight.

The fan does not beep when the buttons are pressed which is great for changing the fan settings when someone is sleeping.

As far as noise goes this fan is very middle of the range.

Cleaning instructions state not to open the fan in order to clean it.

The recommendation is to clean the Fan only with a vacuum equipped with a brush attachment; however, some have had trouble as vacuums do not have enough suction to get right inside.

Others have successfully used compressed air in order to comprehensively clean out the fan. You won’t need to buy filters for the fan.

The body should only be cleaned with a soft cloth, not with any alcohol or solvents.

Always be sure to check the power supply before you purchase. The model reviewed here is 120V.

Unique features of this fan

This Lasko tower fan with ionizer is one of only a number of tower fans that contain an ionizer.

An Ionizer is used to remove particles from the air.

The Airborne particles are attracted to the electrode in a similar way to static electricity.

The ions are de-ionized by seeking earthed conductors, such as walls and ceilings.

Ionizing the air is intended to make the air healthier.

It’s great for people who suffer from allergies or asthma or respiratory ailments like that.

A regular fan stirs up these irritants but the Ioniser offsets that.

The Ionizer is carb compliant.

While this is great stuff, there is little way to measure the effectiveness of this and many consumers did not notice much difference with this feature on or off.

The assembly is relatively simple but does require a bit of construction out of the box which requires a small Phillips head screwdriver to assemble a total of 6 screws, 2 of which hold the base together and 4 hold the base to the fan.

There’s a small tab on the bottom of the unit which has to align with the base, but there are no little tricks to assembling the fan.

There are not really any specific accessories that go with the fan as such, but as with other fans the fan may still need cleaning.

As the manufacturer does not recommend taking the fan apart the suggested way to clean it is with a vacuum and brush and the outside with a soft cloth.

However, some had more success with an air compressor.

There is an overwhelming positive from consumers after buying this fan.

This fan is the best selling Tower fans on Amazon and with the positive feedback, it is no surprise consumers are happy to purchase this reliable fan.

It doesn’t go without its gripes but for the most part, they have not warranted poor feedback from its purchasers.

For the price, you pay the quality of the fan appears to deserve its favorable ratings.

Like most of the other tower fans around a similar price, the Lasko 2551 comes with a one year warranty.

As far as price goes it might be a tad more expensive to similar tower fans though catch this fan in a sale and you may end up getting a good deal.

Given the positive feedback and what seems to be a very reliable, well designed and functioning fan paying a few extra dollars for the quality would not be unwise.

There will always be things about most products you don’t like and your opinion on that product will be defined by those things.

There are a few things to not like about this tower fan but for the most part, they are minor annoyances.

A short cord, a bright light, a better range on the remote, a small oscillation range are things to suffer through with this fan but really the primary reasons for buying a fan, good airflow, easy to use, a range of setting options are well covered.

It’s a durable stylish piece of machinery that has earned thousands of favorable reviews.

If you don’t have a huge budget and are looking for a reliable fan with good airflow that just, works well this would be a suitable fit.

Itâ€™s not silent, and it won’t have the biggest output of all fans but it’s very good in between.