White tower fans make choosing a tower fan that fits in with the home decor easy.  When trying to find the right fan and in the right color can sometimes lead to a dead end. Tower fans often come in a variation of colors and sometimes the fans can come at different costs for different colors. Obviously white is a neutral color and will fit in almost any room without clashing with the decor. Below we have compiled a list of the 5 most stylish white tower fans for your home. 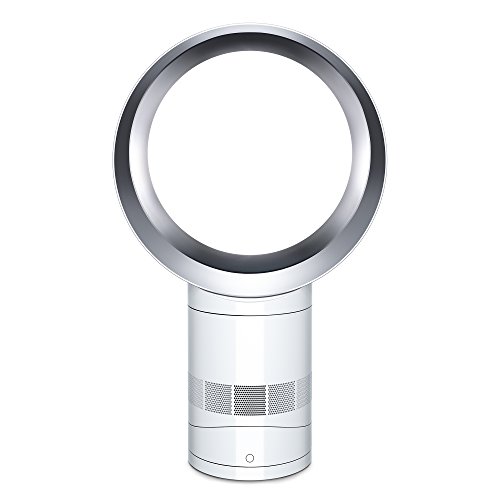 Dyson Air Multiplier AM06 Table Fan, 10 Inches, White/Silver
Check Price
If you have been searching for Tower fans at all you have probably already come across the Dyson Am06. Its amazing design is enough to bring it into every tower fan conversation, unfortunately as is its price tag! But either way, the conversation is had, it’s a great fan. It’s very quiet, has 10 wind speed controls which are more than almost all other tower fans, it blows a pretty reasonable amount of air and it’s probably the easiest tower fan to clean being that it’s a bladeless fan, and its design allows easy access.
This fan comes in 3 different colors including white. Often with tower fans, some colors can cost more or less than others, but with the AM06 you pay the same expensive price as the other colors. This fan has a remote control for easy changing of settings and also really good timer control settings with 15-minute intervals. This is great compared to other tower fans which can have up to a minimum of 1-hour intervals. 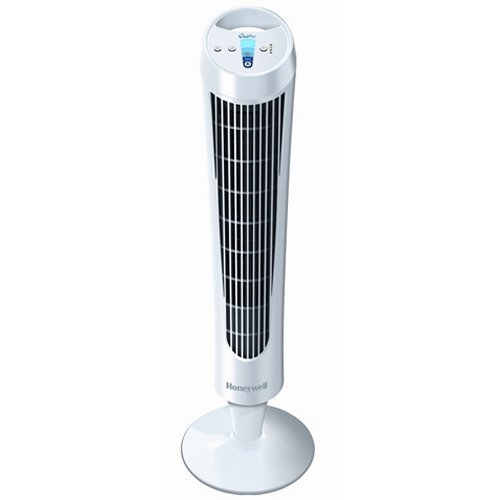 2 Pack Bundle of Honeywell QuietSet Whole Room Tower Fan - White, HY-254
Check Price
The Honeywell HY is Amazon’s choice for tower fans. As mentioned above prices often vary depending on the color and this is one example. The white fan is actually a little bit cheaper than the black variation, which is great for those looking for a white tower fan. This tower fan comes with 5 speeds which is a bit more than the minimal 3 speeds usually available. This fan, however, is not a bladeless fan like your Am07 above, so will likely have a bit more noise pollution and be a little bit harder to clean. The timer range has a minimum of 1-hour intervals which is not wonderful for a tower fan, with others going down to 15-minute intervals.

Sharper Image 36” White ETL Certified Tower Fan with Remote Control
Check Price
This white tower fan has a nice modern look to it. It almost looks like a giant USB stick, but in a good way. It has a slim design and comes with a remote control to change your settings. The fan is a bladeless fan so you will get less noise pollution than your traditional fans.
The oscillation on this is 60 degrees which is quite low compared to a lot of other tower fans with some others reaching up to almost 100 degrees of oscillation but you do have the tilt option to aim the direction of your airflow which many other tower fans don’t have the option of.
With an easily removable air filter, you are able to get in and remove the filter in order to give it a good cleanout. 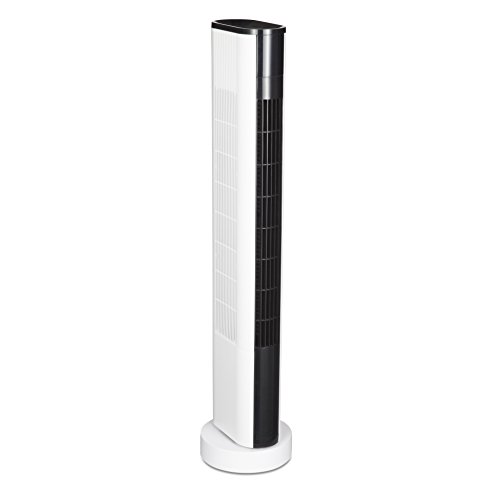 This white tower fan is another that would fit right into a modern-day home with modern decor. Like many tower fans, it comes with 3-speed temperature control. Controls can be changed via a Touch screen LED display on the top of the unit or conveniently made with the remote control.
This fan has the ‘nature’ setting like a few other fans, which is meant to simulate a breeze from the real world by varying the wind speeds during its cycle. It also boasts of being “More energy efficient than a household light bulb.” Its timer can be set from 30-minute increments up to 7.5 hours. 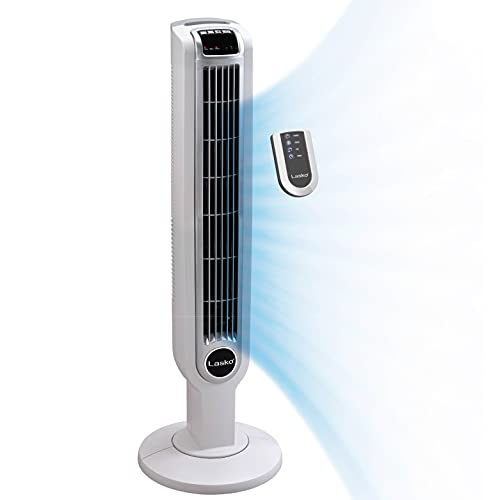 Lasko has a pretty good reputation when it comes to tower fans and the Lasko 2510 is a pretty solid unit. It comes with an electronic touch control panel as well as a remote control so you can conveniently change the fan settings from distance. There is a carry handle and in-built remote control storage so you can keep track of your remote when you are not using the unit.
Like many tower fans, it comes with the 3 fan speed settings. Its slim space-saving design gives this fan the ability to slot into your home with minimal space. Though the above white tower fans might look a bit more modern this fan may suit you if you are looking for something a little less futuristic.