Top Rated Ceiling Fan Brands – Where do I start?

Top Rated Ceiling Fan Brands – Where do I start?

When searching for a new product, whatever it might be, you always want to know you are getting good quality and reliable product from a top-rated and trusted brand. So what are some of the top-rated ceiling fan brands?

Hunter, Haiku and Emerson are all very highly touted ceiling fan brands with recommendations and awards to validate their quality.

There are also much more which produce high-quality products.

Below we take a look.

Luckily most of the time there have been hundreds of people who have been through the process before you have.

This is great as you have some metrics to begin your search for a quality product.

So you are looking for a top-rated ceiling fan?

There are a few ways you can measure this in regards to ceiling fans.

First, you can look at the most important factors people look for in a ceiling fan and then find the top-rated ceiling fans to suit.

For example, when looking for a ceiling fan, you would generally want a fan that is energy efficient or has great airflow efficiency.

Those two things are not necessarily the same thing either. We will explain further below.

You might want a fan that has the best feedback from its purchasers.

You might want a smart fan, a large CFM fan, a unique ceiling fan, there are a number of factors to take into consideration.

So who are some of the top-rated ceiling fan brands?

Below is a list of a few of the most popular ceiling fan brands.

Unfortunately, there is no ranking system for brands.

We can, however, dig a bit deeper and find out a bit more about some of these brands.

If you are thinking of buying a ceiling fan, and ware wanting one that is energy efficient, look for fans with an Energy Star Rating.

This means the fan has been independently tested and awarded as an energy-efficient product.

Brands that made the list for energy efficiency in 2017 are Minka Aire, Aeratron, Monte Carlo, Haiku, Fanimation, Emerson and some commercial-sized fans made by TroposAir and Big Air.

Remember to check the make and model of the ceiling fan and keep an eye out for the Energy Star Label.

Most ceiling fans these days have an airflow efficiency rating, and if not it is easily worked out with an equation.

As we mentioned above airflow efficiency does not necessarily mean the most efficient fan for your needs.

We highly recommend reading this article which explains in detail why the airflow efficiency rating could be a little misleading.

That said, it is still a useful metric of sorts.

We have looked at the airflow efficiency for a number of fans and although we have not collated the specs from every fan and brand, we have come across this particular fan which has the highest airflow efficiency rating we have seen so far.

The Monte Carlo Dylan Ceiling below has an airflow efficiency rating of 221. (Check our page of unique ceiling fans to get an idea of CFM and features) 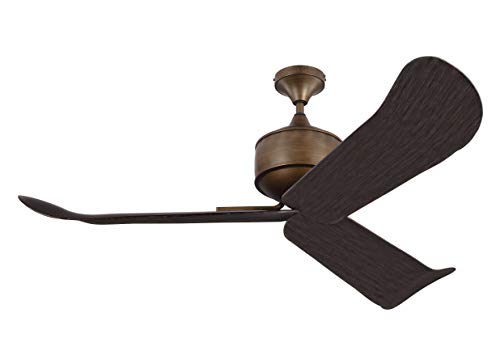 Accolades are always a good signifier of whether a brand is reputable,  trustworthy and innovative.

In 2015 Fanimation won an ADEX award for design excellence.

Haiku Have picked up a number of awards which you can see on their awards page.

Over at bestreviews.com Haiku feature in their top-rated fans list.

Hunter Fan Company pop up often when it comes to awards.

In 2016 the received an award from prnewswire.com for editors choice wifi enabled ceiling fans.

They took top place at bestreviews.com for the best ceiling fan and best bang for your buck.

TheSpruce.com also rated a Hunter fan as their top choice.

Over at hansonwholesale.com they are big fans (sorry) of the Emerson ceiling fans which feature often in their best ceiling fan list.

We have perused through a number of popular websites that sell ceiling fans which have customer ratings, to find some of the top-rated ceiling fans and which brands find themselves at the top of the lists.

This page at Amazon.com lists the highest rated fans by customer feedback. You will see a lot of Hunter fans there with very high ratings, along with a number of other ceiling fans we have mentioned above.

There are a large number of ceiling fan brands to choose from.

Hunter, Emerson, and Haiku make a lot of great fans and have good credentials and awards that make them some of the top rated ceiling fan brands.

If you are unsure where to start looking, these brands are a great place to start.

Of course, that’s not to say you will not find a high-quality fan from any other brand.

Just remember to do your due diligence before purchasing.

Keep in mind factors that make purchasing a ceiling fan important to you.

Things such as power, efficiency, size, the convenience of use.

Hopefully, this guide has helped. Feel free to leave a comment or ask a question!

1 thought on “Top Rated Ceiling Fan Brands – Where do I start?”